Your guide to a coding education


All across the nation, programs are sprouting, encouraging young and old alike to learn how to code. These programs range from low-key online tutorials to full-blown bootcamps. All of them want to promote the "new literacy", and you want in on the fun. Why should you learn to code, who should you learn from, and what can you expect?

The Guardian recently called coding software " the language of our world". Every day, millions of people consume and create content from devices that know what to do because someone, somewhere told the device what to do using lines of code. Programs like Awesome Inc U exist in order to teach these important skills to both young and old alike in order to enable them to move from being _consumers __ _to _creators.__ _Awesome Inc isn't the only place doing this either. Both online and off, many resources are being created to teach these skills.

Why are these programs sprouting up? College Board, the testing agency behind the ACT and AP Exams, reports that 14,517 students took the AP computer science test in 2010, nearly 87% fewer students than the AP Calculus test. Time Magazine reports that this is because fewer than 10% of schools offer courses like computer science or software engineering. It looks like traditional school isn't getting the job done for high schoolers.

What about college? Somewhat, but at a price. Atop the US News list for top computer engineering colleges is MIT — at a whopping $43,000 per year. The lowest price on the top 10 is University of Texas- Austin at $9,564 per year — in state, that is.

This isn't to say that getting a university education isn't worth it; it's that programs like Awesome Inc U want everyone to learn to code without spending a fortune. Here's a breakdown of the kind of nontraditional ways to learn to code:

Online courses are the most widespread source of coding education. In 2013, Code.org got 28 million people into coding with its "Hour of Code" campaign. Other sites, like Codecademy.com, offer low-key, interactive tutorials. At this level, no one's making any promises that you'll suddenly be the next top programmer at Google, but it is the first key step to getting used to the environment and getting into the problem-solving mindset of a programmer (arguably more useful than learning any one language).

Other sites like iTunes U and Udemy offer full-blown courses complete with video lectures from professors. Many of Awesome Inc U's online courses are administered through Udemy, and this format is gaining considerable popularity. The prices for Udemy courses are drastically lower than attending a physical institution, and you can get a comprehensive learning experience.

The online learning environment isn't for everyone, and thankfully you don't have to live in San Francisco to have access to great resources. Other than Awesome Inc U, there are some other nontraditional ways to learn code, many located in the Southeast United States.

One example is General Assembly, which has campuses all across the world as well as online classes. They happen to have a campus in Atlanta, and are a pretty big player in computer science education apart from universities. General Assembly's offerings range from full-time, 12-week hack bootcamps, to one-day crash courses and refreshers, similar to Awesome Inc U. One event is "Building Native Apps with JavaScript" for $30, and it promises the takeaway of having written a functional mobile app in JavaScript by the end of the class.

There are also more extensive part-time offerings, similar to Awesome Inc U's Academy and Web Developer Bootcamp. These programs can be pricey but they promise a practical job-ready knowledge of the material. General Assembly and others claim their education is more relevant than that of a university, because they are taught by real developers and focus on having actual, tangible project results.

Computer programming education is growing, and it's growing just in time too. While no one can guarantee you a job because you did Codecademy, enrolled in a one-day class at Awesome Inc U, or even attended a big university, learning to code is one of the best investments you could make. These programs are starting because supply has to meet demand. The number of software engineering jobs is expected to grow 22% in the next 10 years, while the average for other jobs is 11%. In 2012, the median pay was $93,350, which is more than enough to pay for tuition to local code bootcamps like NSS or Big Nerd Ranch in Atlanta in a short time. 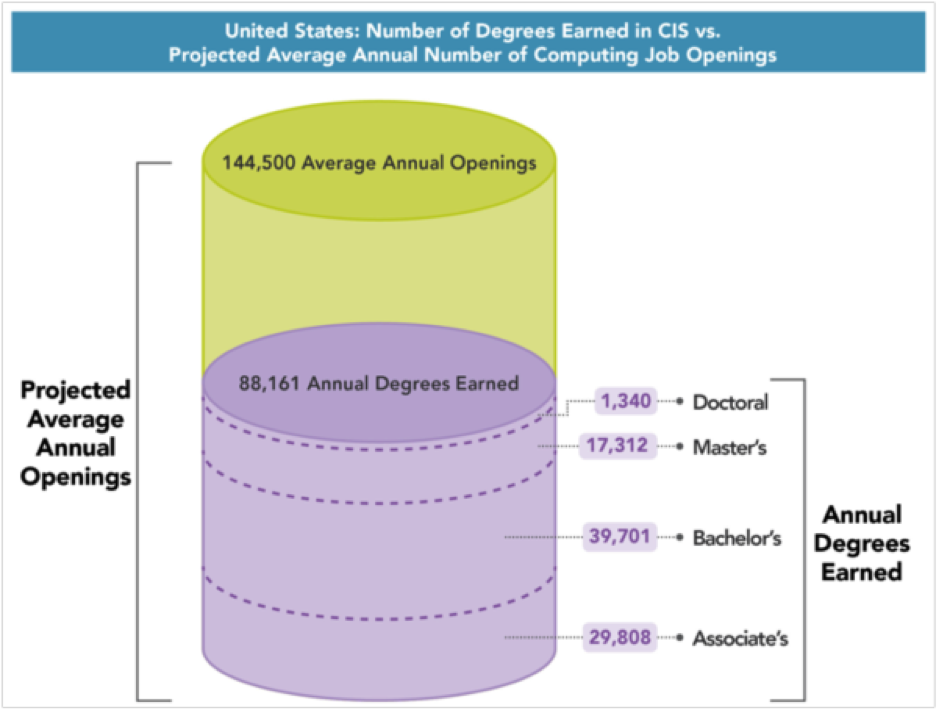 At the end of the day, these programs are working. Not only are the big programs placing people in jobs; every one-day class and every online campaign is generating interest. Remember the stat about the woeful number of engaged high-school students from College Board? That was from 2010. Now, more than double that many students take the test. From 2013 to 2014, there was a 19% increase in participation, more than any other test. 792 more schools offered the test. The numbers still aren't great, but they are getting better, and it's programs like Awesome Inc. U that are helping people get there.

More than anything, especially if you aren't looking into a computer science or engineering career, learning code isn't always about the code. It's about how to think. It's about breaking down a big problem into something solvable. Being a thinker and a problem solver is something that goes far in any field for anyone, anywhere, and that is why, now more than ever, everyone should learn to code.