How To Change Your Life In Just One Hour This December 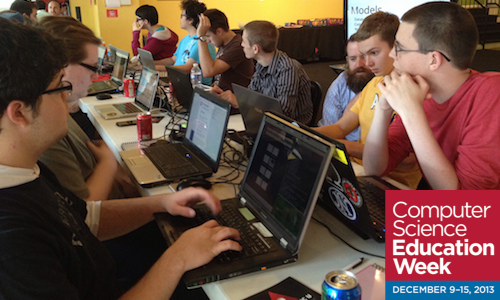 Like many things, the hardest part of learning to code is simply getting started. Fortunately, the world has gone ahead and made this part MUCH easier for you, than it was for, say, Grace Hopper. There are a plethora of free resources available on the web, many employing onboarding methods that will have you churning out lines of code before you even realize your new-found love of the semicolon key. And if these resources weren’t enough for you to start dabbling in software, our friends at Code.org have dedicated a week in December to give you a swift kick in the pants to jumpstart your practice of programming: the Hour of Code.

Like most challenging creative tasks, writing software comes with a sort of activation energy hurdle that aspiring practitioners must overcome. It took me a significant amount of energy and focus just to write this blog post, but by far the most challenging part was actually sitting down and beginning to type. If you have had the experience of learning to cook, learning to play a new sport or instrument, or attempting to become conversational in a new spoken language, then you’ve experienced the same core challenge of learning to code.

I’d argue that the actual process of learning to code is actually much easier than any of these things. Software has this amazing property of being rooted in human logic. There was no such logic to aid me when I first learned that the plural of Goose is Geese, or that it was humanly-possibly to contort my hand into playing a barre chord on the guitar. Additionally, software is such a recent invention that many of the inventors are still around, here to share tactical advice as well as insight into the philosophy of the languages and frameworks they’ve created. Could you imagine being able to ask the inventor of the guitar why she chose 6 strings over 4 or 8? For at least a short while, the equivalent is quite possible with programming, and the path to doing so is as short as buying a ticket to PyCon or RubyConf, or just tweeting at Guido van Rossum.

I want you to commit to just get started. Pick just one hour during national CS Education Week (December 9-15) and do something. If you know a K-12 school who would like to bring the Hour of Code to their classroom this December, let us know how Awesome Inc U can help.

And if all else fails, hit me up on Twitter or Facebook and I’ll sit down with you 1-on-1 for an hour.