From The Trenches - Bootcamp F16 Update 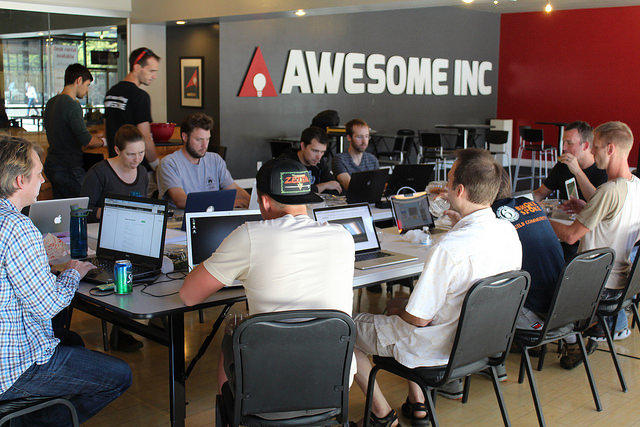 Six weeks ago, the ten students in our Web Developer Bootcamp gathered into one room at Awesome Inc and cracked open their laptops. In six more weeks, they’ll conclude the formal educational portion of our F16 Bootcamp, armed with the necessary skills and experiences to land their first job as a developer. What they’re doing, learning how to develop software, is no easy task. The journey so far has been filled with a whole range of celebration and frustration, tears and laughter. I wanted to share a brief glance into the world into which our students are diving.

While we’ve heard that programming is hard, just getting your computer set up to begin programming is no trivial task. Gary Ditsch writes, “Twice yesterday I created a virtual environment with the default python version (which is 2.7.11), when I wanted to use python 3.” Then there’s the lingo. In addition to the multitude of programming languages out there (we write code in no less than five languages in this course), there are also programming frameworks with their own set of verbiage. When Lavanya Manoharan says, “This is Django week.” she is not referring to the Gypsy Jazz musician, nor the 2012 Quentin Tarantino movie. Even as we’ve moved on from static HTML web pages, to dynamic web applications powered by Python and styled with Bootstrap, it’s easy to doubt our abilities. William Hurst wrote, “As a kid, I wanted to be a programmer making computer games (or console games, I suppose); I was disillusioned quickly thereafter seeing what a Qbasic program actually looked like.” While Qbasic may now look elementary, there’s always a new topic, like using an ORM with a database, that makes us feel like quitting.

Programming is full of challenges in nested logic, tricky environment configurations, complex math, and arcane syntax. Yet, one of the biggest struggles for many programmers is just naming things. We’ve often enjoyed the creative names that Jason Mize has given his projects and their components, which draws on his experience in art and music. Speaking of drawing, each Wednesday we have a Lunch & Learn session, where one of our Bootcampers teach the rest of us some non-programming skill in which they are an expert. We’ve learned how to draw, sing, roll a whitewater kayak, and even play Dungeons & Dragons. It’s tough being a beginner programmer, but we were all beginners once. Anders Friis embraces a healthy perspective when he said in week one, “I think that I am doing pretty well for being a noob.” We looked for optimism like this when we selected our students for this cohort, and it’s been great to see them continue to exude this characteristic.

While it’s been fun simply getting to know everyone, we started this Bootcamp cohort with a well-defined purpose: to help 10 people get their first job as a software developer. In addition to the hard technical skills, we designed the Bootcamp to reinforce the soft skills that our employer partners are looking for, such as teamwork. We’ve used Git and GitHub to collaborate on projects with the whole class, and we’ve done several projects with 2-person teams, gaining experience in Pair Programming. We’ve also seen our students overcoming obstacles. Kelly Wright recalls struggling with a topic, thinking she understood it, then going “Back to square one.” But she didn’t give up. With more practice, some help from our expert instructors, she later emerged victorious when, “It all finally made sense at an even deeper level than before.” While every student in this cohort is smart, we’ve seen them become noticeably better programmers week after week. Brett Fraley showed some great maturity when he said, “While project planning and management are key steps to designing and building anything, I realized that planning is a skill. Like all skills, they take regular practice to improve upon.” In the end, it’s not just our students’ programming skills that will launch their new careers. It is their character and their ability to get even better each day.

We couldn’t be more proud of our Bootcamp students and how far they’ve come in these first six weeks. Over the next six weeks, they’ll continue to grow beyond slingers of code into more disciplined architects of systems, designers of interfaces, wranglers of cloud servers, and valuable contributors to teams. They’ve proven that they can build software and they have a hunger to keep learning and mastering their newfound craft. If your organization is hiring junior developers, let us know, we’d love to welcome you to Awesome Inc to get to know our F16 cohort. We’ll also be at the November 1st undrcvr lex event mingling with local tech companies.

PS: Applications are now open for our Spring 2017 cohort, and can be accessed via the Bootcamp application page.